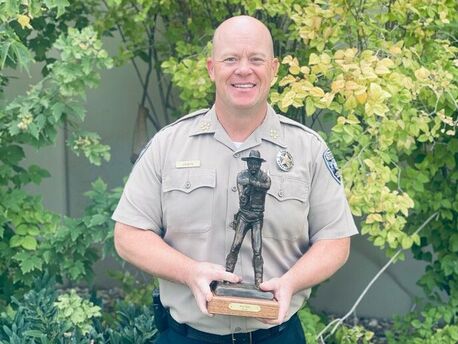 “We support lawful efforts of local law enforcement agencies to protect citizens in their homes and in their communities. We urge reform of the legal system to accomplish a swift and balanced administration of justice, including consideration of the rights of the victim. We support capital punishment when appropriate.” - Republican Party Platform

Public safety is about whether people feel safe and whether the community has the conditions it needs to be safe for its residents and businesses. It starts with the quality of your Sheriff, and we have the best in the business with Sheriff Ryan Arbon – “Lawman of the Year.”

"There is magic over there they have built around Sheriff Arbon’s leadership.” - Sheriff Chad Jensen, President of the Utah Sheriffs Association.
Public safety is about whether people feel safe and whether the community has the conditions it needs to be safe for its residents and businesses. It relates directly to community vitality, economy, education, and health.

When folks join with their neighbors and hire a sheriff, government is born. The individual citizens delegate to the sheriff their unquestionable right to protect themselves. The sheriff now does for them only that which they had a right to do for themselves—nothing more. This is the proper role of government.

The county Sheriff is the last line of defense when it comes to upholding and defending the Constitution. A Sheriff’s duties go far beyond writing tickets, making arrests and operating jails. A Sheriff also has an obligation to protect the Constitutional rights of the citizens of his/her county. All Sheriffs take an oath to uphold and defend the Constitution, from enemies foreign AND domestic.

For as long as I have been alive, the role of the County jail was to jail individuals who were accused and awaiting trial or convicted and sentenced for the crimes they committed. “Jailing” was intended to remove the individual from the community to protect the community while justice was considered and served.

In 2015, the state legislature moved the goalposts and passed the Justice Reinvestment Initiative (JRI) which essentially changed the role of “Jailing” to that of “Corrections.” That is, rather than house inmates to protect the community while they are awaiting trial, JRI directed law enforcement to increase mental health treatment and rehabilitation services for offenders.

While JRI’s strategy of reducing state prison populations by changing many felony drug arrests and convictions to misdemeanors did reduce the state prison population, it flooded county jails with these new misdemeanor arrests and convictions. And of course, all of these new reclassified offenders, under JRI…require medical and mental health services.

It has come to my attention, and further research has confirmed, that statements I have made in my campaign regarding the cost to local law enforcement in addressing inmate mental health issues were not accurate. It seems this inaccuracy has created the perception that as a county commissioner, I would defund these practices. I apologize for this confusion.

First let me say Public Safety is my number one issue and I was shocked to learn of the Justice Reinvention Initiative (JRI) passed by the state legislature in 2015. Looking to reduce state prison populations, JRI reclassified drug offenses from felonies to misdemeanors sending these offenders to our county jails. I believe this legislation placed an undue burden on local law enforcement with respect to managing corrections by failing to adequately implement and fund the program.

Promises made by JRI reforms focused on strengthening local correction systems so that relieving the strain on the state system would not transfer offenders and create burdens on the local jails and its related mental health services. Because features of JRI designed to provide strong alternatives to incarceration and funding were not implemented, the Initiative has failed miserably, leaving the county jails with the bill.

This fact infuriated me and, in my attempts, to address it, I mistakenly mixed the Jail’s medical costs with its mental health costs while reviewing the budget.
As I understand it now…a contract to provide medical services to the jail runs about $3.5 million annually…while the contract to provide mental health services is approximately $210,000 annually. While this fact was indeed pointed out to me by a member of your team during my campaign, I have only now been able to confirm it.
​
I appreciate the opportunity to address this error an apologize to anyone who took my error in costs as a sign I would not aggressively fund Public Safety.  I believe Public Safety is the proper role of government and will never treat it as a political issue. I will not support any future efforts by the state legislature to transfer costs to local government without proper funding or necessary support.