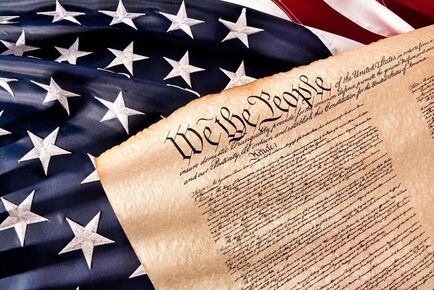 ​We believe government properly exists by the consent of the governed and must be restrained from intruding into the freedoms of its citizens. The function of government is not to grant rights, but to protect the unalienable, God-given rights of life, liberty, property, and the pursuit of happiness.” - Republican Party Platform

​Since God created us with certain inalienable rights and we, in turn, created government to help secure and safeguard those rights, it follows that humans are superior to the creature which they created.

I believe government exists by the consent of the governed to guarantee the free exercise of conscience, the right and control of property, and the protection of life.

When you think about our inalienable rights acknowledged in the Constitution, you must consider their origins. Rights are either God-given as part of the divine plan, or they are granted by government as part of the political plan. Reason, necessity, tradition, and religious conviction lead me to accepting the divine origin of our rights. Because, if we accept the premise that human rights are granted by government, then we must be willing to accept they can be denied by government.

A government is nothing more or less than a relatively small group of citizens who have been hired, in a sense, by the rest of us to perform certain functions and discharge certain responsibilities which have been authorized. The government itself has no innate power or privilege to do anything. Its only source of authority and power is from the people who created it.

Keep in mind that the people who have created their government can give to that government only such powers as they themselves have. They cannot give that which they do not possess. The proper role of government then is limited only to those spheres of activity within which the individual citizen has the right to act.
​
By deriving it’s just powers from the governed, government becomes primarily a mechanism for defense against bodily harm, theft, and involuntary servitude. Government cannot claim the power to redistribute the wealth or force reluctant citizens to take a jab or perform acts of charity against their will.
​
Government is created by men/women. No man or woman can delegate a power that he or she does not possess. The creature cannot exceed the creator. We cannot exceed God, our creator…and government cannot exceed us, its creator.
Donate